The Evolution of Group Fitness: From Aerobics to Modern Day Fitness Classes 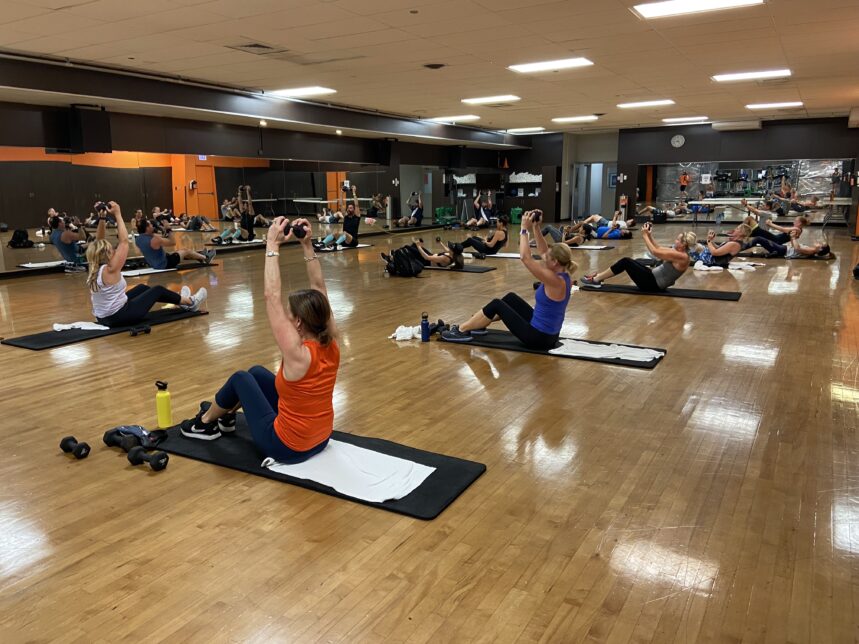 Dr. Kenneth H. Cooper published a book in 1968 titled Aerobics that would become the foundation for a brand new industry. He wrote about his findings of the positive benefits of exercise, such as lowered blood pressure, a stronger heart, and that blood carried oxygen more efficiently. It was his ideas that sparked new forms of group fitness classes that still continue to evolve to this day.

Shortly after his book was published, Dr. Cooper’s ideas of exercise as a way to improve your health and prevent disease grew in popularity thanks to fitness group classes such as Judi Sheppard Missett’s Jazzercise. She was teaching dance classes at Northwestern University in 1968 and noticed a drop-off in her class attendance. Realizing people had been attending for the exercise, she adapted her choreography to be less complicated, and thus Jazzercise was born. Over the years, teaching the classes herself became too much so she franchised the practice, the first of its kind. You might remember Jazzercise for its colorful leotards and leg warmers, but the program is still going strong today, combining elements of dance, yoga, Pilates, and kickboxing.

Around the same time that Missett created Jazzercise, another form of exercise dance was created. In 1969, Jacki Sorensen was tasked with creating a fitness program for military wives in Puerto Rico where her husband was stationed. After reading Dr. Cooper’s Aerobics book, and scoring an “excellent” on his physical fitness test, she determined that her dancing was an equivalent to Cooper’s suggestion of jogging for exercise. From there, she developed a TV exercise program consisting of a variety of dance moves. Following her husband’s military service, she debuted her new program at a YMCA in New Jersey, which grew in popularity through word of mouth and expanded to other YMCA locations and universities.

If the first group fitness classes were based on a fun activity like dance, you might be wondering where step aerobics came from. The answer is that it came from physical therapy. While Gin Miller was recovering from a knee injury in the 1980s, part of her rehab involved stepping up and down on a crate to strengthen her legs. She realized that it not only strengthened her legs, but was also a great aerobic workout. Stepping up and down was somewhat boring, so timing it with music made it more fun and exciting. Thus, step aerobics was born! It was at its peak during the 1990s, but has since declined in popularity due to the emergence of more group fitness options. There’s no denying it’s still a great aerobic workout, and can be find at many health clubs today.

In 1989, avid cyclist Johnny Goldberg needed to find a way to train for his Road Across America cross-country road cycling race, but spend enough time at home with his pregnant wife. Proving necessity is the mother of invention, he hand-built a stationary bike that could be used at home and withstand long periods of both sitting and standing for his training. After finding success with his new invention, he built several more and began teaching classes out of his garage. Demand eventually outgrew his small space so he partnered with Schwinn to build more bikes of his design and opened his own spin studios in California. In 1995, he introduced Spinning to the world at IHRSA in San Francisco, and the rest, as they say, is history. Spinning is now practiced in 80 countries worldwide, and has spawned countless models of indoor bikes for group fitness purposes.

The invention of aqua fitness classes, also known as water aerobics, is credited to Jack Lalanne in the 1950s. However, it wasn’t until the ’70s and ’80s where formal organized classes became popular. Aqua fitness classes were seen as a great alternative for those who suffered from joint pain, but were still an efficient form of aerobic exercise. The intense nature of the workout allowed participants to strengthen their muscles without causing damage to their joints. It’s still very common to find water aerobics classes on group fitness schedules today.

By the mid-2000s, group fitness classes experienced a revival. Proven concepts took on new formats, giving them new life. Existing classes adapted to modern trends. Modern music changed the way people participated. Thanks to new fitness research, many classes have changed their focus to high-intensity interval training. The goal of these new methodologies is to work smarter, not harder, with the underlying goal of fitness group classes remaining the same as it has from the beginning…making fitness fun!

Click the buttons below to learn more about our group fitness offerings and more at each of our Chicago locations.